“Tomorrow, I will use up my leftover squash puree.” 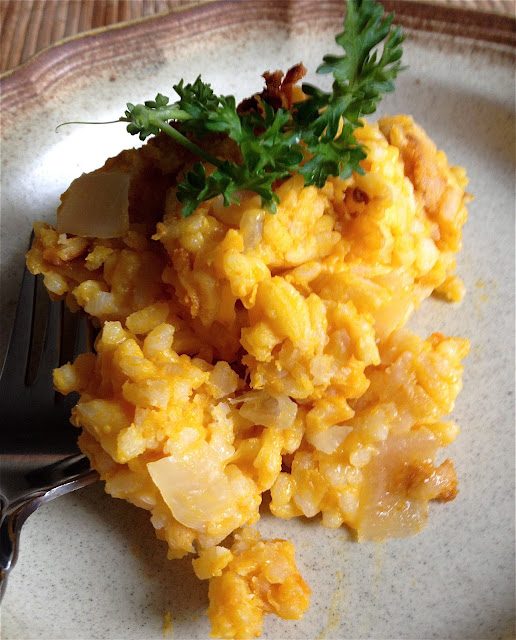 Disclaimer: risotto in general is not a health food, and this version is no exception.  It is butter, starchy, and cheesy.  “Carb-tastic,” if you will.  I try to limit my portion size.

The beauty of this recipe is that you can vary the amount of squash that you use, depending on how much you have and how much squashy flavor you like.  A little bit of squash just adds a layer of depth to the primary cheese flavor.  Adding more will feature the squash flavor more prominently.

Even the smallest amount will turn the risotto a brilliant orange, making it look similar to Kraft Macaroni and Cheese.  That resemblance alone made the picky eaters in my life much more open to trying it!

I served this as a side dish to steaks.  That was a mistake. Its so heavy and creamy, I think that it can be a meal on its own, when accompanied by an interesting salad.

Continue cooking, adding broth in half cup increments when the liquid is almost absorbed.  The rice should never get dry.  After about 20 minutes from the first addition of broth, start tasting the rice for doneness.  When the risotto is done, the rice will be tender but not mushy.  You may not need the full 5 cups of broth (I didn’t.)

When the rice is tender, add 1 tablespoon butter and the parmesan cheese. Turn off the heat and stir the risotto vigorously.  Season to taste with salt. Let stand for a few minutes before serving.

Source: Heavily adapted from The Art of Simple Food by Alice Waters

Some pictures of the cooking process that might help you: