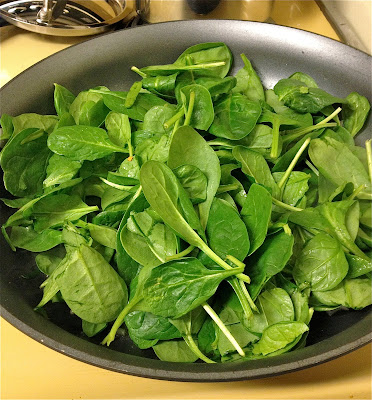 Winter is upon us, which means I have to cheat a little with the “seasonal” aspect of eat your veggies.  In the Pacific Northwest, very little grows over winter. Our farmers markets close up, the CSAs either stop or switch to imported produce, and the little “Washington Grown” tags are scarce in the produce department. Our choices are to either spend the winter subsisting on local potatoes and apples, or switch to imported foods.

I’ll try to focus on recipes that highlight some of these strategies in the future.  For this week, I bought some spinach that was on sale.  It had a code on the package that allowed me to use HarvestMark.com to see that it was grown in either Southern California or Arizona, and was harvested about 7 days prior to when I purchased it. Not too shabby, for winter!

Melt coconut oil over medium heat in a saute pan.  Add onion and spices and saute for 3-5 minutes, or until onion is soft.  Add garlic, saute 1 minute more.
Add spinach to pan.  Stir and cook for about 30 seconds, then cover the pan, remove from heat, and allow spinach to steam for about 3-4 minutes or until wilted.

Recipe Source: Inspired by the flavors in this recipe by Heidi at 101cookbooks.com