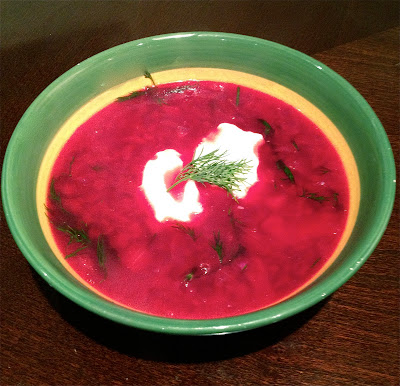 Before I made Borscht a few days ago, I knew (or thought I knew) very little about it. My sum knowledge was:

Upon further research, I have learned that the term “Borscht” is just about as general as the term “Chowder.”  I revised my knowledge:

There is no one way to make borscht.  The Ukrainian version of beets cooked in meat broth is what many people associate with borscht.  However, recipes have been passed down through families from generation to generation, with everyone changing it to suit their tastes and resources.   Some add other veggies and extra meat.  Some serve it with sour cream. Or yogurt. Or radishes. Or mushrooms. They add tomatoes, or replace the beets altogether. The possibilities are endless, and I’m sure everyone thinks their version is the best. That's the beautiful thing about traditional food.
I chose this recipe for several reasons.  First, it was cheap.  There aren’t any whacky cuts of meat or a long list of ingredients.  Second, it was fast.  On this particular day, I didn’t want to simmer a cow leg all afternoon.  In fact, since I cooked it for Sarah, I didn’t want to use any cow parts at all. She doesn’t eat cows.  Last but certainly not least, it is light and healthy.  Beets and cabbage are full of nutrients!

The results were fantastic, and I think borscht will replace simple roast beets as go-to dish for any beets I get in my CSA box next year.

Bonus tip:  Beet juice can be removed from hands, baby faces,  and other surfaces with an acid (like vinegar or lemon juice) plus salt.

Melt the butter in a soup pot over medium heat.  Add the onion and saute until soft.  Add the garlic and cook for one minute.  Add the cabbage and beets, turn up the heat to medium high, and cook for about 10 minutes, stirring occasionally.

Add the broth and 1 teaspoon salt, bring to a boil and simmer, uncovered, for 30 minutes.  Add the dill, vinegar, and remaining salt.  Taste, and add more vinegar if the soup is too sweet.

Borscht info sources:
Meek, James. “The story of borshch.” The Guardian, 14 March 2008.
“The Food Timeline: Soup.”
Wikipedia article on Borscht
Posted by Rachael at 1:00 AM