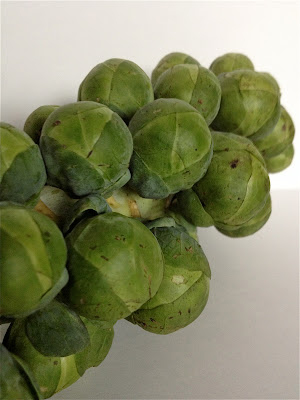 Brussels Sprouts, for some, conjure memories of being forced to eat bitter, mushy things boiled to death by a well-intentioned yet clueless mother. I think most people who dislike Brussels Sprouts must have had some experience like this, because everyone who hates them does so with unusual fervor.

Like all variants of cabbage, Brussels Sprouts taste AWFUL when overcooked to the point of mushiness. So don’t do that.  Don’t do that to any vegetables. Especially the green ones, because overcooking breaks down their nutrient content.

I bought my sprouts on a pre-holiday sale.  They came on a stalk, which I thought was really cool.  They seem fresher like that, and the sprouts were all similarly sized, making cooking a lot simpler.

This recipe flavors the sprouts with fish sauce, which is a Thai condiment made from fermented anchovies. I avoided fish sauce for years because “fermented anchovies” does not sound appetizing, especially to a fish hater like myself.  However, fish sauce doesn’t really taste that fishy.  It actually tastes like richer, more complex soy sauce.  It is very salty and a little bit goes a long way.

If you’re a vegetarian, or I haven’t convinced you that fish sauce is worth trying, use soy sauce instead. 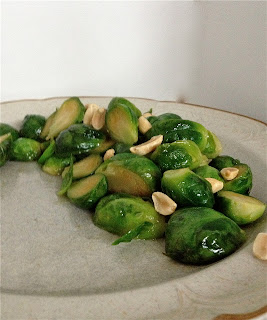 Bring a large pot of boiling water to a simmer, and have a bowl of very cold ice water at hand.

Carefully place the brussel sprouts into the simmering water and blanch.  (You want them to be slightly tender. This took my small sprouts 3 minutes.  Err on the side of undercooked!) Remove the sprouts and place in the bowl of ice water.  Dry on paper towels and cut each sprout in half.

Heat about a tablespoon of oil in a frying pan over medium high heat.  Add the sprouts and the fish sauce. Cook, stirring occasionally, until sprouts are heated through and browned a bit (about 4 minutes).  Remove to a serving platter.  Sprinkle with lime juice and peanuts.

Source: Adapted from this recipe from The Kitchn.
Posted by Rachael at 6:00 AM